During Jan-Dec 2019, ICAR-CIFA has undertaken several activities in West Bengal, Andhra Pradesh, Odisha, Tamilnadu, Punjab states towards socio-economic development of Scheduled Caste people. Promotion of scientific carp culture, backyard poultry farming were undertaken.  These activities have benefitted 997 families.  Preliminary survey was conducted and baseline data were collected prior to implementation of the work.  An workshop was conducted at kultali, West Bengal for development of action plan involving major stakeholders. The scientists of the institute also distributed carp seed and demonstrated carp seed rearing. They also demonstrated use of lime and supplementary feed  in aquaculture for better production. The farmers, all belonging to Scheduled Caste community, were exposed for the first time to scientific carp culture. They are eager to learn and are enthusiastic about scientific ways of fish farming.  In Punjab two workshops were held in order to create awareness about fish farming. Farmers, state department officials, KVK , SHGs took part in these programmes. In Tamilnadu cages developed by TANVASU were procured and distributed among SC farmers  for rearing of poultry birds. One workshop cum awareness programme on “Benefits of Scientific fish farming for nutritional security”  was conducted at Guntur ,AndhraPradesh. It is envisaged that socio-economic condition of the SC beneficiaries will improve through ICAR CIFA’s intervention under SCSP.

Summary of activities conducted under SCSP during 2019

In Gaighata block of North 24 Parganas district, 25 farmers were contacted over phone regarding their loss due to heavy rain on 31.08.20. They were provided with advisory guidance to tackle the situation. The loss(wastage) due to feed was checked by reducing the same to 3% of total biomass. The farmers were also advised to apply lime to their ponds @ 40-50 kg/ha to improve the water quality.

To improve the livelihood and nutrition security of rural masses, aquaculture was chosen as one of the best options and 474 interested farmers in 3 districts of West Bengal, South 24 Parganas, Nadia and North 24 Parganas were identified and trained. These farmers’ interest groups were identified through PRA and created through a number of meetings in 7 villages of these districts, in collaboration with State Fisheries Department and KVKs. The following input support for aquaculture were given during the current year. In 3 districts of West Bengal 16590 kg of fish feed and 27800 kg of lime were distributed to 474 farmers, 474 nos. of aluminum handi and cast nets was distributed to 474 farmers of 7 villages. 5580 nos. of Horticultural saplings (12 species of plant) was distributed to 90 farmers.

Table. Input support to the beneficiaries under SCSP Scheme In West Bengal

The institute has executed a memorandum of understanding (MoU) with Shasya Shyamala KVK(SSKVK), Sonarpur under SCSP Scheme in West Bengal and an amount of Rs.32.06 Lakhs was released to SSKVK. For execution of work farmers meeting was organized on 15 December 2020 at Sonarpur KVK with scientists of CIFA, KVK officials and 30 farmers of Saheberaberd I & II and Baburabad Villages of Sonarpur Block, South 24-Parganas. The input support to the Scheduled caste beneficiaries of saheberabad I & II, and Baburabad village for aquaculture and livestock development was of priority to increase their confidence level. The water samples of 150 beneficiary ponds were collected and analyzed for dissolved oxygen, pH and ammonia nitrogen. The results are as follows : Dissolved oxygen (ppm) ranged from 1.06 -7.11, pH 7.03-7.88 and NH3  (ppm) 0.01 -0.5. The results were within the normal range of pond culture.

To improve the livelihood of farmers during Covid 19 pandemic under SCSP programme another MoU with ICAR-CIFA and Uttar Banga Krishi Viswavidyalay, Coochbehar, West Bengal was executed with an aim to implement the developmental activities like aquaculture, poultry, goatery, horticulture, etc. in 3 districts of North Bengal viz., Uttar Dinajpur, Dakshin Dinajpur and Coochbehar which will cover 11 different blocks.

Twenty-seven beneficiaries were selected for livelihood development in rural areas in Kendrapara district under SCSP programme. Beneficaries belonging to areas of Righagarh, Banipal, Gupti, Derabis and Pattamundai were selected with the help of District Fisheries Officer, Kendrapara. Aquaculture inputs such as feed, lime, cast net, aluminium handi and ice box were distributed in presence of two MLAs from Kendrapara and Rajnagar Constituency on 26 June 2020. Officials of Fisheries Department, Kendrapara were involved in selection of beneficiaries and input distribution. A meeting was held with the framers to understand their problems regarding aquaculture practices and they were also sensitized on scientific aquaculture practices.

A taining-cum-demonstration programme on “Scientific Fish Farming and Management Practices in Freshwater Aquaculture” organized by RRC, ICAR-CIFA, Vijayawada at Kuchipudi village, Guntur District, Andhra Pradesh during 25-27 February 2020. A total of 30 fish farmers were participated in the training programme. The programme aimed at capacity building of SC farmers for improvement of livelihood and income generation. Dr. D. Srinivas, ADF, Vijayawada, Shri. B. Krishna Kishore, FDO, Kuchipudi, and V. Ratnaprakash, Programme Assistant, KVK, Guntur District, A.P. were present as resource persons. Inputs like portable water and soil test kits (10 nos.) and ice chillers (20 nos.) were distributed to the beneficiaries who had attended the training programme. Floating fish feed (50 bags) was distributed to the beneficiaries in the third phase of inputs distribution who have successfully adopted fish farming in Amruthalur block, Guntur district, Andhra Pradesh.

Demonstration of carp culture was done for existing beneficiaries in Kuchipudi village, Guntur District, Andhra Pradesh. The beneficiaries stocked carp spawn @ 5 million per ha in earthen ponds. They were fed mix of De-oiled rice bran and Ground nut oil cake @ 10 % of body weight initially, thereafter reduced to 5%. After 45 days, 50% of survival was achieved during the nursery rearing. Carp fry was reared in rearing pond for fingerling production. The benifiaries generated income of Rs. 40,000 individually after 4 months of culture period. 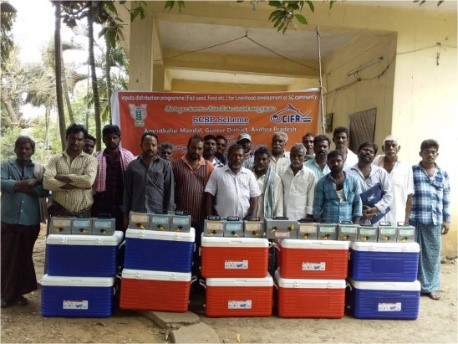 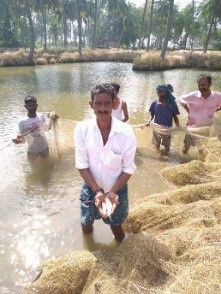 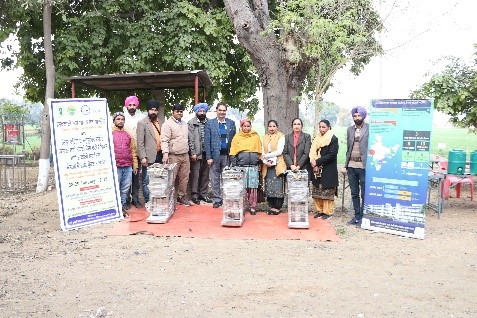 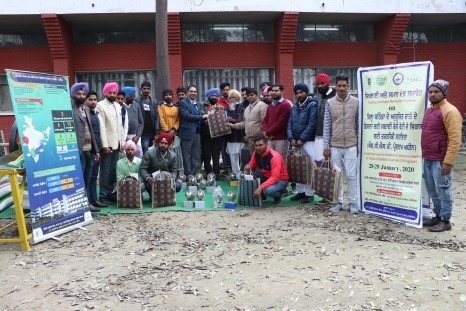 One day training programme on “Scientific Aquaculture Practices and Backyard Poultry Farming” was organized at Maduranthakam, Tamil Nadu on 11 February 2020. About 100 women beneficiaries selected from different Self-Help Groups participated for backyard poultry farming and 13 beneficiaries for grow-out culture of carps. The beneficiaries were provided with backyard poultry cages, 5000 nos. of day old desi poultry chicks for rearing in cages and starter poultry feed. Grow out technology of rohu with necessary inputs and scientific guidance of ICAR-CIFA was demonstrated at Chitamur, Maduranthakam and Lathur Blocks of Kanchipuram district. Advanced fingerlings of rohu (about 30,000 nos) were stocked in ponds of SCSP beneficiaries. 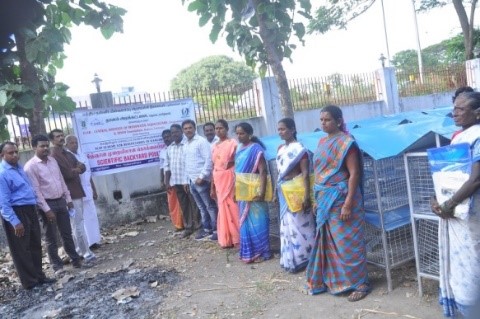 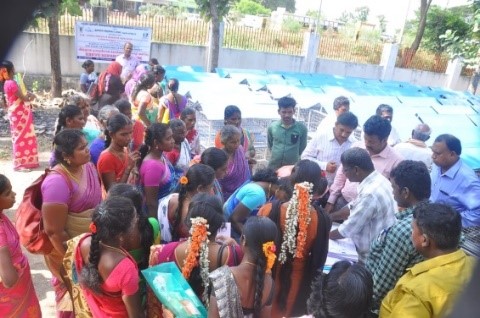